Two weather systems coinciding brought heavy rainfall to Delhi-NCR at the fag end of the monsoon season, after what was a mostly dry August and September.

The heavy rainfall spell that began on Thursday and extended into Friday was only the second such heavy spell for the southwest monsoon season in Delhi so far. The first such heavy spell was recorded when the monsoon hit Delhi on June 30.

Moderate rainfall and heavy rainfall in one or two places are on the forecast for Saturday. (Express photo by Amit Mehra)

The city had recorded a large deficit in rainfall in August and in September till the current rainfall spell hit the National Capital Region. The Safdarjung weather observatory had a rainfall deficit of around 53% as of September 19. This deficit was wiped off with the rainfall recorded on Thursday and Friday. Till 8.30 am on Friday, Safdarjung had recorded 130.5 mm of rainfall in September, which is an excess of 16% for the month, when compared to a normal of 112.8 mm till September 23. 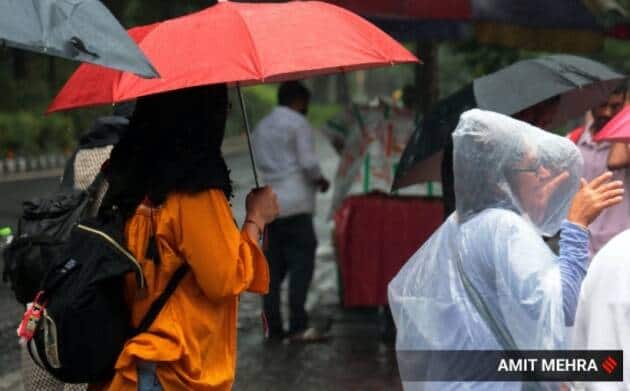 The weather department has issued a ‘yellow’ alert for Friday, cautioning people about moderate rain at most places in the city. (Express Photo By Amit Mehra)

Till 5.30 pm on Friday, Safdarjung recorded 8 mm of rainfall, while Palam recorded 30.3 mm of rain.

This spell is likely to end and dry weather could return from the night of September 25 or morning of September 26 onwards, Jenamani said.

Jenamani explained that the rainfall is on account of the remnants of a low-pressure system and a Western Disturbance. According to an IMD update issued Friday evening, a cyclonic circulation lies over northwest Madhya Pradesh and the neighbourhood.

With overcast skies and intermittent rainfall, the maximum temperature dipped to 27.6 degrees Celsius on Friday, seven degrees below the normal for this time of the year. (Express photo by Amit Mehra)

“The maximum amount of rainfall in the past 24 hours was in the Faridabad-Ballabgarh area, which saw 180 mm. An intense circulation is active around 200 km to the southeast of Delhi. This extends up to the mid tropospheric levels. A Western Disturbance is also interacting with this, and there is a lot of moisture supply from the Arabian Sea,” he said.

Moderate rainfall and heavy rainfall in one or two places are on the forecast for Saturday. A ‘yellow’ alert has been issued for Delhi on Saturday, which is a warning to ‘be aware’.

With overcast skies and intermittent rainfall, the maximum temperature dipped to 27.6 degrees Celsius on Friday, seven degrees below the normal for this time of the year.